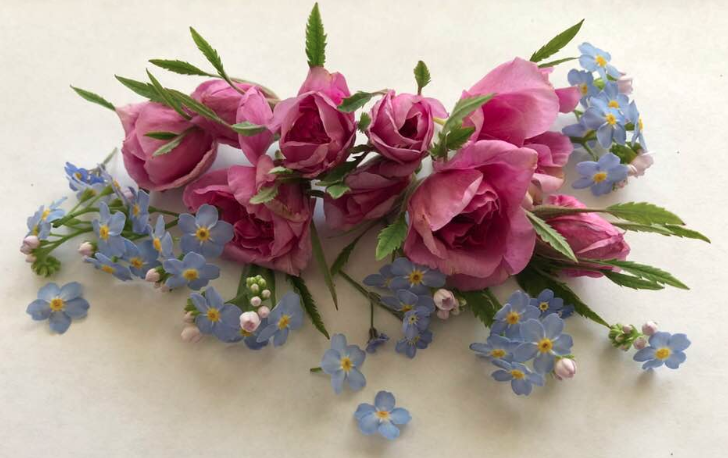 A new year opens before her as blank as the paper on her desk. Picking up a blue, ballpoint pen she writes her resolutions.

“There is nothing important happening, nothing of interest,” Silvia writes at eighty-three years old, but she is not taking notes. She is keeping a diary. “There is not going to be a later date” for her to “make use of past thoughts.” But the date is not discomforting; she no longer feels driven to write a “story or a novel or a history.” Those days rest in the bottom drawer of her desk. Now, she intends to explore her “everyday thoughts and moods” but, “what is the use of having thoughts if there is no record of them.”

Fifty-six years have passed since she last kept a journal. A small notebook kept in a rucksack whose pages held the last words she had written in Estonia. With hand grenades in her brassiere, foot-weary and often ankle-deep in mud, she passes the less fortunate sprawled on the ground unburied. She notes, the effort to upend vehicles into ditches before moving into the night. The explosion of shell fire after breakfast the morning her friend was buried beside the schoolhouse. She records abandoned farms with their eerie silence before crossing the border.

The notebook of 1944 did not hold thoughts or emotions; these she kept within. It’s pages recorded “a history pure and simple: facts, names, dates, and conditions.” It was a mapping away from the oncoming advance of the Russians although it also “guaranteed a death sentence or at least a trip to Siberia,” had it been discovered when red stars appeared instead of the anticipated Americans. Silvia’s war journal met an ignoble end, shredded into tiny pieces dropped into the pit of an outhouse.

The New Year journal came to me by way of her friend in one of the two boxes Silvia had wanted to send to the archives. It is an unassuming black and white composition book bought at a drugstore, price tag $1.89. But Silvia has pasted a bouquet of forget-me-nots on the cover, noting the date in large numerals: 2001.

I open its pages as I would a rare book. Silvia’s handwriting, as familiar to me as my own, is now crabbed with old age, but her thoughts are as vibrant and varied as ever. Her entries end on April 1st, signaling the tentative arrival of spring in Vermont and a return to the garden, but the three winter months she wrote, offer a glimpse of her thoughts and concerns as well as the pervasiveness of her memories.

Attempts to economize are present throughout. “No more books. No more plants except broccoli. No new pets. No more CD’s except maybe some (one) more Chopin.”

She blows snow from her driveway in January purposefully braving the cold to elude memories of the war. “Didn’t help.” Finches appear at her feeder, leading her thoughts to childhood. The birds that would alight on her head and shoulders as she walked home from school. Hanjo, her older brother rushing to set up his camera, never swiftly enough before a flutter of wings.

I read the journal in its entirety, sometimes with a loop pressed to the paper at more difficult passages, blocking out the world as I step into hers. Then, I return to the beginning.

She will not light a candle, nor will she celebrate; she hasn’t for many years. But the birthday is not forgotten, and she spends the day, as well as the following, grappling with conflicting emotions before coming to reconciliation. Silvia mentions “Visna” by name, infrequently in her writing. But she writes for two days, ending her entry with a single remaining task left unresolved.

“There is one thing I still owe Visna. I have to hunt up his ashes on Long Island and ship them to Estonia.”

As I close Silvia’s notebook, the flowers on the cover bring to mind the roses and forget-me-nots picked from her garden. The petals carefully dried then tucked into my bag for the flight to Estonia.

Before the ceremony, celebrating Henrik Visnapuu’s life, I had sat on a stone bench in the warmth of the sun, watching two women stooped with age tending a grave. Later they passed my bench, their murmuring voices, continuing a conversation of many years. Surely they are but a few years younger than Silvia would have been had she been sitting on the bench. The women’s steps are slow and careful, occasionally they pause, then continue down the wide path out of sight. I remain on the bench, with my thoughts, holding Silvia’s flowers to place on Henrik Visnapuu’s grave.

Many months after the ceremony Silvia’s last notebook was discovered. She had not forgotten her promise to Henrik, now kept.

Today marks the anniversary of Henrik Visnapuu’s death in 1951. His remains were returned to Estonia by his nephew in 2018.

All italicized quotes are from Silvia’s last notebook.