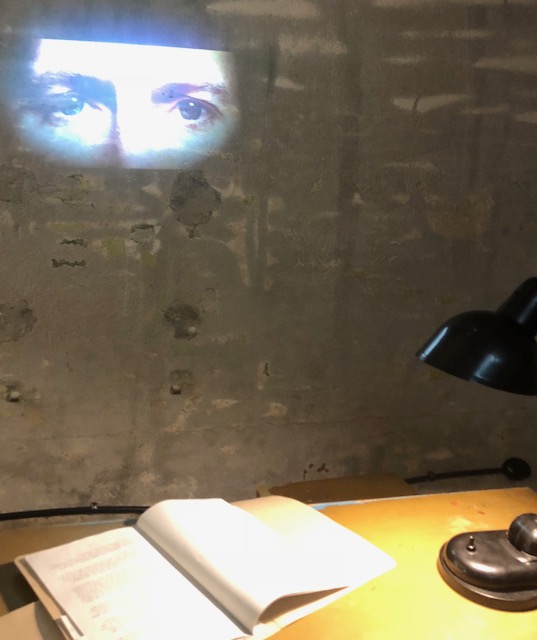 It was with a fair amount of trepidation that I had previously passed the imposing facade of my destination. Moving past the infamous bricked-in windows, knowing I would walk down the steps to the KGB Prison Cells, one of many prisons still in use by the NKVD/KGB into the 1990s.

Bars remain, closing off the blank hopelessness of the windows; slated benches are pushed against walls, interrogation tables command the center, a lone urinal. Five photographs stand in a cell, but like a piece by Boltanski, the others are there, a river of projected faces. Listening to the memories, my eyes well up.

I make it to the final cell, in a separate corridor removed from the others. A place of solitary confinement for those who would not speak, despite the sleepless days and nights of delirium and torture, the torture depicted in the paintings by Joaan Saarniit that line the corridor, painted from visual memories that would not cease.

I step inside the smallest cell, closing the heavy metal door behind me to a room in shrouded light as if never again could that space face the glare from a bulb that was never dimmed. My hands touch the scars, pockmarked on the bilious green curve of the wall; a wall that seems to push inward, smothering out all air and space in the awkwardly tiny room. I sit on the hard wooden slats of the narrow bench looking for something in the room on which to focus, seeking what people speak about who have endured in solitary confinement. Looking up I see the triangular void in the ceiling and wonder whose eyes lock with mine?

But the door has not fully closed, and from the small crack, I overhear a portion of a tour given to someone working on a documentary: the bodies found in the courtyard, the description of torture, the length of time in the cell that I currently sit in. My door ajar.

I sit in the dim light as a man is being questioned. He says he makes a point in his travels across the world to visit places such as this in homage to those who have been tortured and killed; as a reminder of the preciousness of freedom, what happens when it fades away.

His grandfather was in a Nazi concentration camp.

The interview over, I open the creaking door, passing back through the corridors, stumbling on the cobblestones in the light of the street.

I order a coffee and review the news for the first time in over a week. I read of the meeting between Putin and Trump, Nato, another mass shooting – this time, not our school children but journalists. I read more on the refugee children ripped from their parents and placed in cages, the callous coat of a woman, the move toward the dissolution of unions, ICE raids, protests and this just a fraction of the news this week. My eyes well up over coffee.

And this is why Silvia’s story is important. This is why I have traveled to Estonia.

So as not to forget the preciousness of freedom, and what it means otherwise.