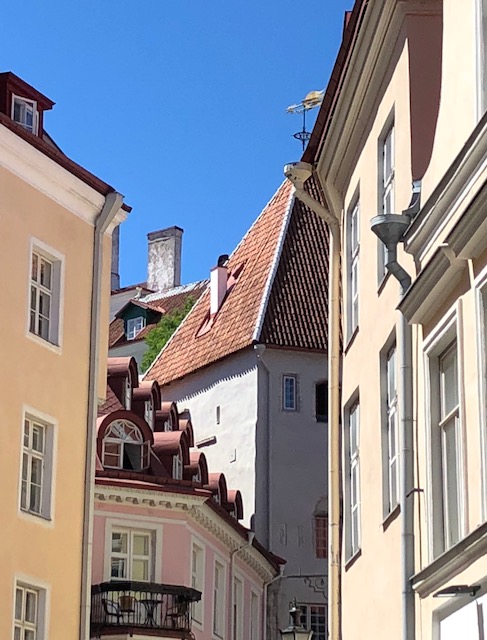 I made the mistake of failing to arrive exactly at eleven o’clock, when the Tallinn City Archive (Tallinna Linna Arhiiv) opens it’s doors, as it took far longer to locate the building than I anticipated in the warren of cobblestone streets, and where historic and architectural distractions arise at every turn. Then there are the small, perhaps, insignificant things that capture attention, and bring delight. A single petal that has fallen between the Medieval cobblestones, or the hand-crafted Georgian door that is tagged with a hand-lettered flowery script, the moss green carpet of the chestnuts underfoot, or a bicyclist moving through an archway of shadow and light.

I rush along, at my singular pace – lost. I do not go into the beautiful churches, nor stop too long in admiration at any one place. My thoughts are as rambling as my feet. My mission is the archive and finding the address of Silvia’s first house in Tallinn. It is the house about which she writes. It is the house with the park nearby on the outskirts of the city. It is her childhood home, but also the house where childhood ended. The unknown walls I seek, formed the rooms where Silvia’s mother, Johanna was laid out for viewing after she died.

But suddenly I am brought to a halt. From the corner of my eye I see two towers. Towers that in their juxtaposition bring to mind an image from home.

It is the Vermont State Hospital where Silvia worked for nearly twenty years that I see in my minds eye, and in that brief heady moment, I could not help but see her imposed symbolism. For Silvia the hospital must have brought to mind the Medieval towers. And in those towers, I was reminded of the reason for this trip.

Yes, I will return to the archives tomorrow, and the two, thick files of papers handed to me to find Silvia’s address in 1929/30.

But, with the two towers, I am reminded that the main purpose of this trip is to capture within myself the essence of Silvia’s Estonia. I’m not here to rush around to archives. Instead, I will get lost on my way.