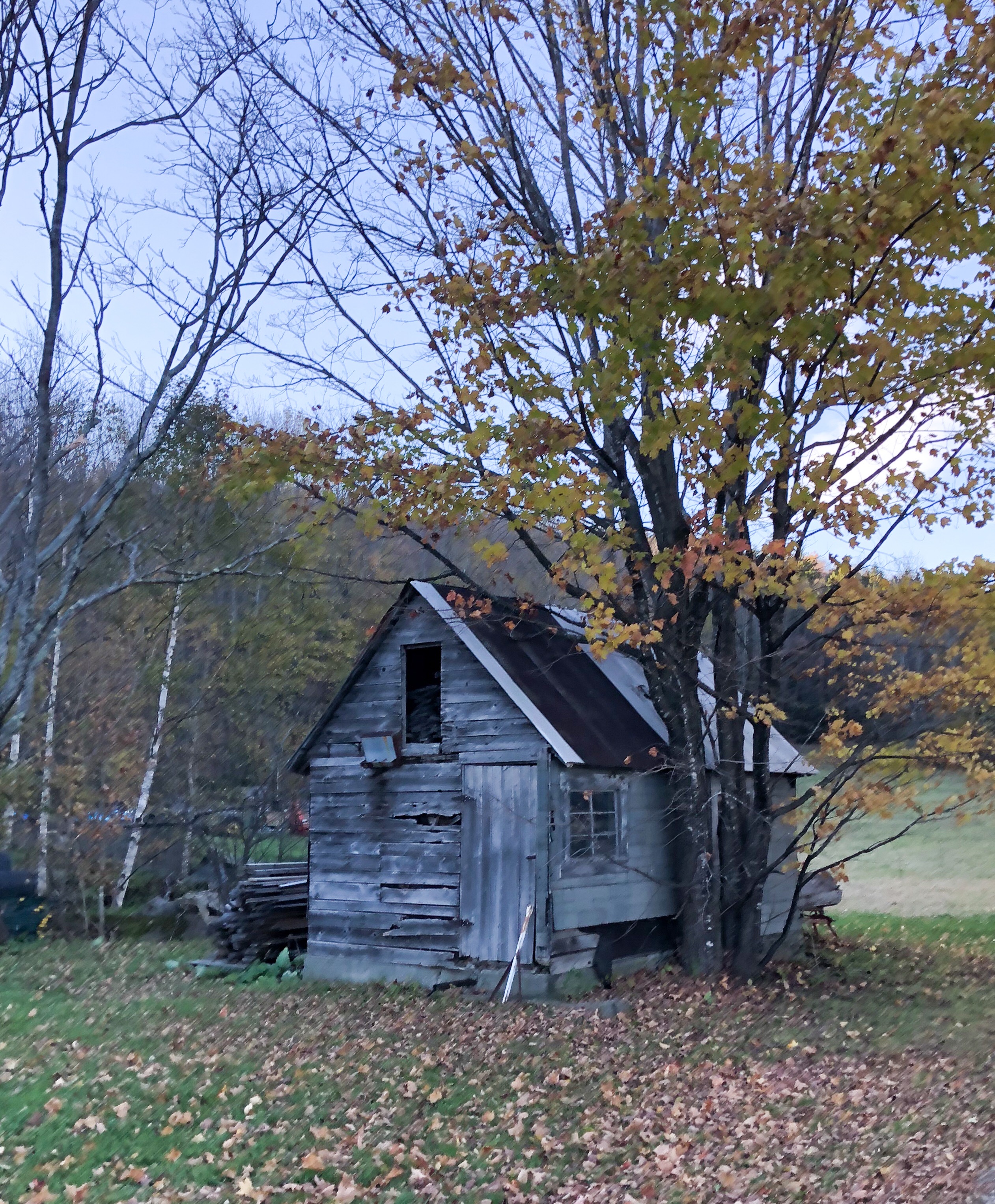 “Roaming in the woods or other wild areas has always been my main source of recreation and greatest pleasure. The woodlands are the only place I feel I belong.”

The fields and pastures, where Silvia’s black horse and three Guernsey cows grazed side-by-side, provide an open view to the Green Mountains on an otherwise wooded land of maple and beech forest. Here Silvia gathers butternuts, sticky in the hand, to the admonishment of a solitary red squirrel who has knocked them from the branches overhead. She collects sheafs of curling birch bark, with its etchings of eyes and archaic symbols, to start her fires. Thick in the prickle of brambles, she fills her basket with berries; mouth sun-sweetened. Her muddy hands pungent, she digs ramps from swaths of glossy green. Skirting ferns too delicate to tread, she climbs over fallen trees with shelves of lichen, scanning the duff for mushrooms in the play of shadow and light. Nearby, a Barred owl begs an answer. Scrambling down steep cliffs, she wades in bedrock basins carved through time by converging streams; their flow diverted by boulders left behind by ancient glaciers. She follows tracks in the snow, glowing blue from their depths, to iced over ponds that melt into song when trillium petals bloom. On stumps and stones engulfed in cushioning moss, she sits. Each breath dissolving borders. Each thought boundless.

“I was free to dream and be myself in the wilderness. I belonged. I was a part of it.”

But the Silvia in the sheltering trees, is not the Silvia on the unpaved road, the day it shifts into a route of escape. Her marriage of the last four years, with its overblown irritations, acrimonious insults, and jealous accusations, has erupted with her husband, Juhan’s uncontrollable rage. Silvia’s attempts to “keep the peace” or “not upset” have become ineffectual. Her wry humor no longer deflects.

Her dreams can only scrape against rough bark, seeking out the cold hollows, curling up in shadow.

Silvia’s words cry out in a letter, “a violently insane husband smashing up the place with a sledgehammer, and – last I heard – still threatening to skin me alive, burn me in along with my livestock.” The nearest house a half mile away, her feet run along the narrow dirt road. Stumbling on stones, she continues. Propelled ever forward by the glowering grimace, the glare of her husband’s stare before the frenzied shouting began. She wants to cry but knows she cannot waste the energy. One more rise on the road, gasping for breath. Silvia’s desperate face appears in the window of the neighbor’s back door. The knife she had grabbed for protection, still grasped in her fist. Pounding.

Silvia visits her husband at the Vermont State Hospital where the insults and suspicions continue. Although with time, his condition seems improved, and he is released, the cycle continues. Her husband is sent home and then readmitted in the year of their divorce, in 1962.

For many years, Silvia will live in continual fear, even after she leaves her beloved hillside farm and moves to Gould Hill and Sparrow Farm Road, at an address unpublished, hidden by a post office box a couple of towns away. Juhan’s phone calls torment in the deep of night. Only his death, in 1969, will silence their ringing. But Silvia, unaware of Juhan’s death, lives in fear of discovery well into the eighties, asking a neighbor to collect her mail, discouraging visitors and rarely leaving her circle of self-protective anonymity.

With my companions, I stand on the dirt road of escape, talking of her life on the farm, near the only remaining structure on the land, a hobbled together shed. The trees begin to cast long shadows, beckoning the chill of autumn’s night, but I hesitate to leave as if sensing the remnants of Silvia yet to be discovered; the parts discarded by necessity like skins shed or broken shells taken far from the nest, waiting to be found in the detritus.

Compelled, I take a final look, walking the road toward the towering maples with their few remaining leaves tenaciously held in a golden glow. Without Silvia’s house and barn to blaze a daily path, I follow the road of escape, toward the distant neighboring house, knowing it is but one part of Silvia’s story on this hillside. With my phone, I record the sound of my feet on the road, the solemn murmur of our voices in speculation while eating wild grapes, sour in the mouth. Unwittingly, I am recording a liminal moment, a moment of unknown waiting. For it is in this delay of leaving, the pause of hesitancy, in which we chance to see the bright green tractor, its slow materialization on the rise of the road ahead in the fading sunlight.

Landscape of Space and Peace, Braintree, Vermont, Part I.