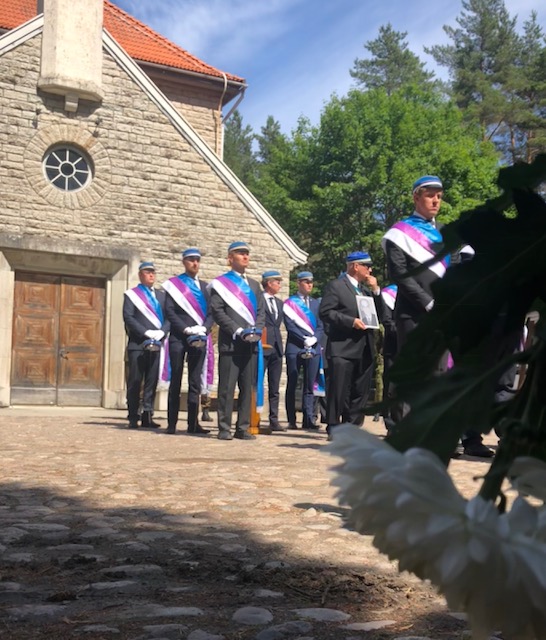 I have come for Silvia. To bear witness in her stead. To be present at the return of Henrik Visnapuu to the soil of his homeland, and his reunion with his wife and first muse, Hilda.

Upon Visnapuu’s unexpected death in 1951, to heart failure, Silvia with a meagre salary, never quite enough for basic living expenses, determinedly paid for Visnapuu’s burial by monthly installment. Honoring him with dignity. Years later, Silvia had thrilled at the thought of Visnapuu being returned to Estonia, but she had not lived long enough to see the day.

I arrive by taxi, having followed the waterfront to the well known cemetery in Estonia: Metsakalmistu, the Forest Cemetery. For Americans and our mechanized tending of cemeteries, most of which no longer allow personalized plantings of any sort, an Estonian cemetery is not easily comparable in the mind: one of exquisite natural beauty, a place of honor to those who have come before.

Metsakalmistu, the resting place of many significant Estonian figures, is a forest of towering evergreens that form a natural cathedral of tall columns in quivering light. Birds rustle in the undergrowth and sing in the branches overhead; resinous scent perfumes the air and a calm peacefulness pervades the light-dappled green of the grounds. Each family’s plot is like a garden unto itself, with flowers and candles and small benches for contemplation and remembrance.

I have arrived early for fear of being late and I walk the paths barefoot, needing to take off my inappropriate heels to find the graves of Silvia’s step-mother, Johanna and her brother Juri. I walk over the roots of trees, feeling the small stones and pine needles beneath my feet, as if I am at home on the mountain in Vermont. Soon, it is time to return to my heels and make my way back to the small chapel as people gather.

The military arrives, young men in rigid formal functions, the final caretakers of Visnapuu’s remains. Next, the president of the writers union and then more members of Sakala (Visnapuu’s student cooperation) wearing their colored sashes, and forming a sea of blue caps. More guests begin to form a growing but intimate group. Everyone carries a bouquet of blue and white flowers: peonies, bachelor’s buttons, hydrangeas and the white chrysanthemum of Siuru. The priests arrive from Tartu as well as Helme, the birthplace of Visnapuu. Photographers swoop like a flock of swallows at dusk, intent on sharing with the people of Estonia, each detail of the ceremony, documenting for posterity.

Sharply, at three o’clock, officiants leave their easy congeniality, stepping into their formal roles and positioning. The brass band begins to play and the procession follows the forest path to the gravesite; our feet covering the long-ago steps of Visnapuu who trod this same path to bury Hilda. I am also following the faint imprint of Silvia’s footfall, felt through time; a young women in 1944, burying her stepmother, not far from this path.

The guests gather at the gravesite, not mourners but solemn nonetheless. Songs are sung and tributes given. Poems are read. A priest gives his blessing.

But the meaning of the words is lost to me, (although graciously translated later). Instead, I follow the natural intonations and rhythm of speech and song. Soon I hear a red-throated bird at the edge of the gathering as she joins with her own song. I watch the glint of the sunlight on a ceremonial sword, as if it were a forest sprite come to pay respects. I study the trees and their colors in the sunlight watching them fade as the branches move in the calm breeze, thinking how these trees will stand by this grave long after I am in my own. Each small piece of nature interweaving with the sounds and traditions of a people honoring both a life and a return, as if listening to the words alone were not enough. Mother nature herself alive in Metsakalmistu.

As Visnapuu’s remains are lowered into the ground, the sexton stands to the side. A line forms, as each person pays their respect with a handful of sand from the sexton’s shovel. I too stand in the line, but cautiously observant, wanting to follow protocol in a custom sadly lost in the states.

The cool sand in my hand, it is Sivlia’s name in my thoughts. As flowers are placed on the growing bouquet on the grave, I offer a small handful of the fading petals from her garden. In memory, with honor.